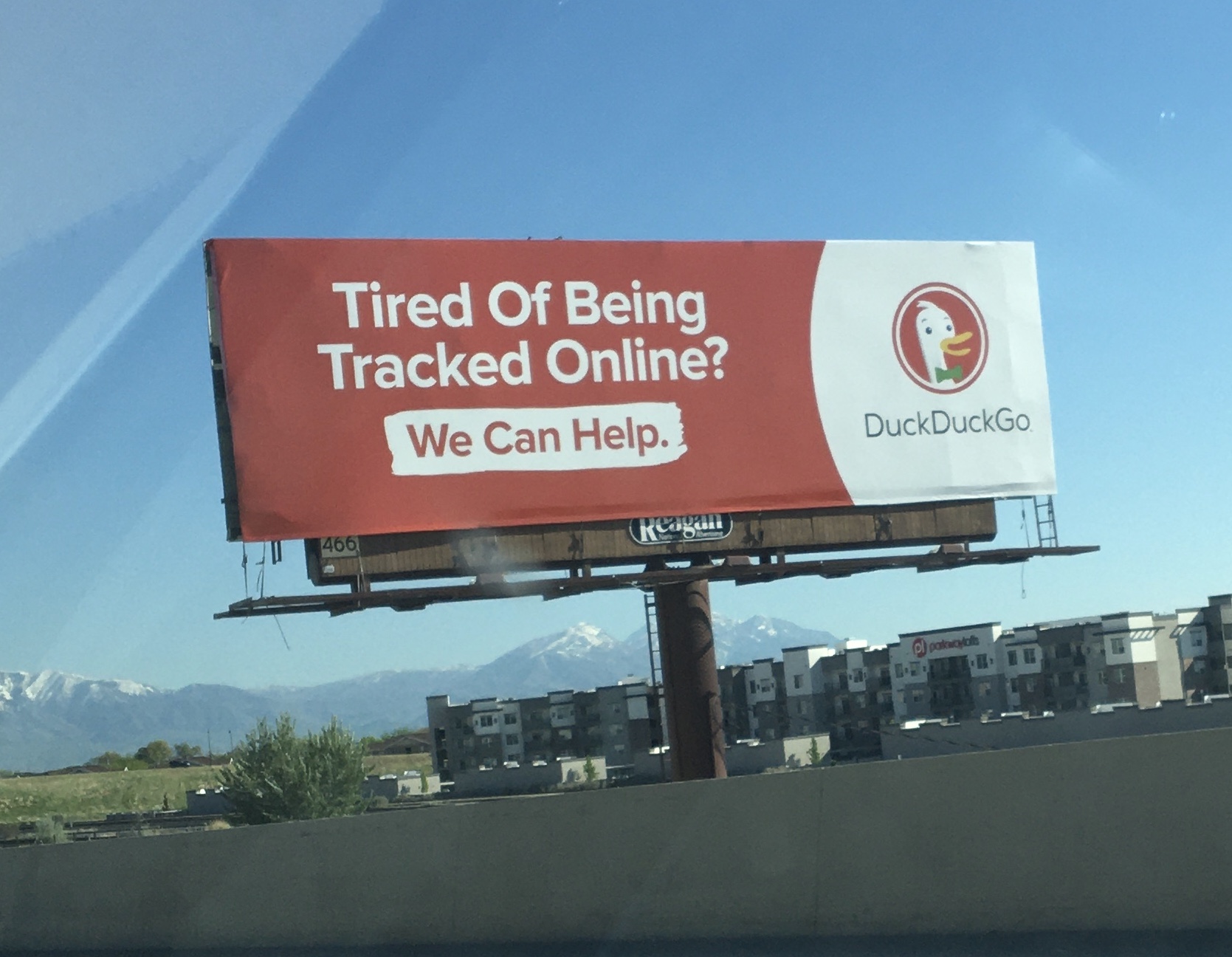 I noticed a ton of these DuckDuckGo billboards this weekend as I drove up and down I-15 between Salt Lake City and Provo this weekend. I saw at least 12 billboards. There were a few different messages. I was only able to catch a picture of this one, but they all basically told the same story: if you’re sick of being tracked online, we can help.

Here’s my critique of this campaign:

Design/Creative
The design is fine. It’s clean, simple, easy to read. Some of the creatives are a little wordy for my taste, but overall easy enough to digest as you drive by at 70mph. The colors have good contrast and the logo is a good size. The copy was straightforward but forgettable. Nothing really stands out or causes me to remember or care about the billboard or the advertised company or search engine.

Placements
They had a ton of static boards. I saw at least a dozen. More than half were cross-reads (on the left side), but they were all pretty visible and it was definitely noticeable that they had a big campaign going. I don’t know where else they are running this campaign outside of Utah, but here in my local market, they’re spending a pretty penny on this campaign.

Messaging
I think the messaging is missing the mark. The really paranoid people are already using DuckDuckGo and the vast majority of the world just doesn’t care that much about privacy. They should find a different message that’s going to resonate with a broader audience, otherwise, what’s the point of running a billboard campaign? To be effective with outdoor, DuckDuckGo needs to come up with a campaign that is going to get people feeling some kind of strong emotion so they’ll take action and/or talk to others about it. Not easy to do in the 1-2 seconds they have with billboard, but that’s what they need to do if they want to move the needle in their battle against the big G.

Maybe the privacy thing will resonate with people, but to be effective with outdoor advertising, they need to tell their story in a more memorable, remarkable way. There’s a ton of different angles they could take. Maybe they go for the funny approach and talk about some funny reasons why people would’t want others to know about their online search habits. That could get pretty weird/hilarious. Or maybe they go full on conspiracy mode and try to scare people into feeling like they need privacy protection. Whatever they do, it needs to elicit more emotion. Meh billboards will get meh results.

Conclusion
I like to see someone putting some real effort into trying to chip away at Google’s stranglehold on the search market, but unfortunately, I don’t see this campaign having any impact. They’ve been beating the privacy drum for a LONG time, but it hasn’t really moved the needle on their market share. They’re putting some serious money into this, but lamentably this campaign is a goose.